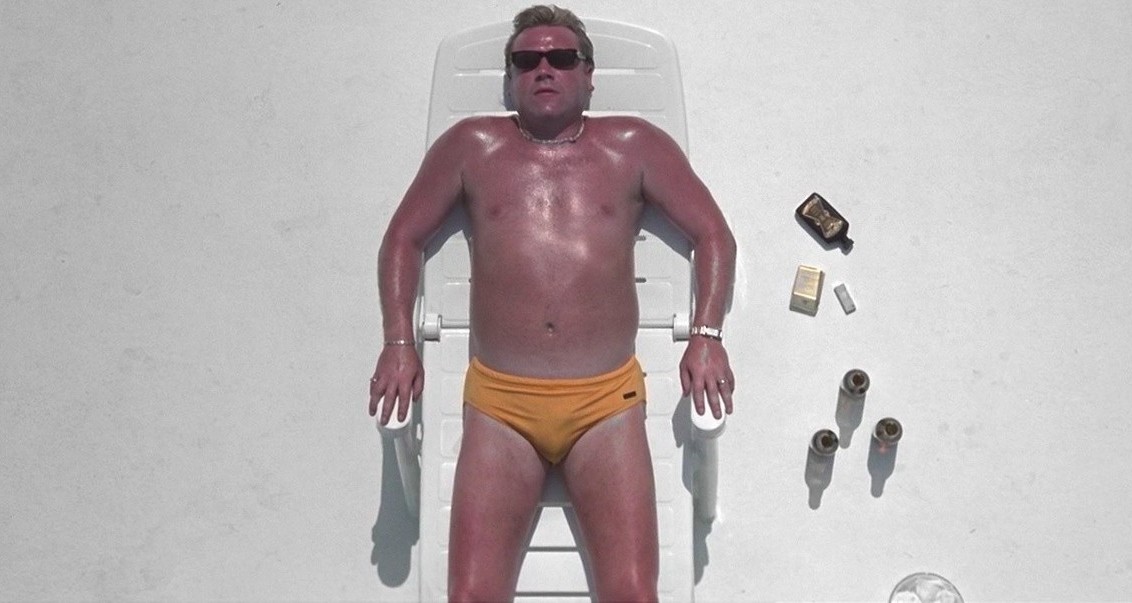 Eleven red hot films to see you through the summer heatwave

Thankfully there are numerous ways to relieve oneself from these drip-inducing temperatures that don’t involve any kind of personality transplant. There’s the obvious ones; cold showers, a leg over the duvet and plenty of manic hand fanning, but then there’s film. Sure, it might not yield the same practical value as say, an ice lolly, but the below selection of films will metaphorically dab at your clammy brow, recalibrate the senses and restore you to your pre-frazzled state. Embracing the heat doesn’t always have to mean firing up the barbie.

Is there an image that better sums up the British attitude to unrelenting sunshine than Ray Winstone, an ungodly shade of puce, stretched out on his sun lounger like a hairy beetroot in tiny yellow trunks? Jonathan Glazer’s 2001 gangster flick continues to enthral and entertain, not least due to an iconic Ben Kingsley performance that improves with every viewing.

In the sun bleached tranquility of southern Spain’s Agua Amarga, Kingsley’s jarring aggression and psychotic mannerisms will rouse you from your hazy slumber like an angry mosquito. As you take heart from the fact your burn will never be as bad as Ray’s, sit back and revel in “the sheer fuck off-ness of it all”.

Although the famous Hockney painting does not feature anywhere in Luca Guadagnino’s film, an equally visceral sense of heat is evoked via two hours of scorching four-way sexual tension. Tilda Swinton, Ralph Fiennes, Matthias Schoenaerts and Dakota Johnson are all behaving very badly on the remote Italian island of Pantelleria. Naturally, there’s plenty of skinny dipping action and lots of across-the-pool lustful gazing.

Swinton, a recovering rock star who is virtually mute for the duration of the film, is brought to the point of temptation by Fiennes, her gregarious former lover, while her hunky partner is seduced by Fiennes’ daughter, played by Dakota Johnson. Apart from a poignant (if inadvertent) message on the refugee crisis, it’s also a good watch for those short on summer holiday inspo.

We doubt many of our readers will have actually smelled napalm in the morning, but if it’s anything like the smell of a sweat-soaked bed sheet in the morning, count us out. What more is there to be said about Francis Coppola’s 1979 masterpiece? Under the blood-red Vietnamese sun, Martin Sheen and his company are instructed to terminate the AWOL Colonel Kurtz, “with extreme prejudice”.

In an airless, mosquito-riddled underworld heated by a merciless sun, the men try and navigate their way up the Nùng Delta to accomplish their mission. It soon becomes clear however that losing their way in the dense jungle is only a precursor to losing themselves along the way.

When the Mercury begins to soar, there is no better relief than a swimming pool. As Ned Merrill in the 1968 film The Swimmer, Bert Lancaster knows this only too well.

While enjoying a dip in his friends’ pool, Merrill has an epiphany. Why just stick to the one pool? Why not swim every pool on the way home? Challenge accepted, the character goes on an aquatic adventure through the affluent Connecticut suburbs. Some of the pool owners are happy to see him, others less so, but there’s always a story to tell and a life to explore. Along the way he encounters several women from his past: a feisty teenage girl; his embittered ex-mistress; and the flirty wife of an old friend.

Ultimately stylish, at times the film’s slick aesthetic bends into hallucinative shapes, reminiscent of diving in and out of water as the sun melts reality.

During a sultry New York summer, rational, clear thinking members of the jury are reduced to a quarrelling, quibbling mess in the case of an 18-year old who, if found guilty of murdering his father, will receive the death penalty. Granted, it can take a lot less to reduce a dozen men to such a state, but in the tropical heat of the courthouse (only three of the film’s 96 minutes are shot elsewhere), tempers flare and rational judgement is all too easily clouded.

Staying cool while others loose their heads is Henry Fonda, Juror 8, who, at the beginning of the film is the only one unconvinced of the prosecution’s claims. Through a combination of extraordinary deduction skills, bravery and sheer charisma, Fonda shows us all the importance of using your head in the face of the mob. As far as courtroom dramas go, no-one does it better.

Few films have embedded themselves into everyday vernacular quite like Hitchcock’s Rear Window. So much so that people will legitimately refer to the act of looking through somebody else’s window as ‘doing a Rear Window‘. This time we’re back in New York for another heatwave setting, which is integral to the plot since it forces everyone to have their windows down and curtains open, giving James Stewart the ideal opportunity for some long-lensed snooping while he recovers from a broken leg.

Through the windows onto which he looks, he not only sees into the homes of his neighbours but their lives, uncovering a tale of murder and deceit that almost costs him his life. If you’re feeling aggrieved about current sleeping conditions there’s inspiration to be found here, with one couple resorting to converting their balcony into a bedroom. Warning: do not sit at your window with a long lensed camera. You will be arrested.

It’s the summer of 1976 and school’s out in Austin, Texas. For Ben Affleck and his testosterone riddled Senior buddies it means a chance to hunt down terrified freshman and spank them with giant paddles. Bizarre, yes, but we’re told it’s common practice over there. Hazing is just one of several initiations that this coming-of-age classic encompasses; there’s enough weed smoking, beer-kegging, back-seat flirting and mail-box-smashing to fill a manual on teen rites of passage.

There’s also a youngish Matthew McConaughey with a slew of unforgettable lines, as well as a strong message on self-discovery, identity and exorcising teen angst. Alright, alright, alright.

With some explosive aids courtesy of friend and pyromaniac Mickey Rourke, the two embark on a murderous path that inevitably calls in to question their loyalties to one another. As the heat turns up on Ned, nothing is as it seems and a tale of love and lust appears as little more than a mirage. Watch the trailer below, headphone users be advised.

Similar to other inclusions on this list, heat is the preverbal spoon with which central elements of plot and character are stirred to boiling point in Spike Lee’s 1989 cult flick. On the streets of Brooklyn during a scorching summer, tensions begin to rise at a local pizzeria. The result is not only a cross-sectional study of cosmopolitan New York, but an investigation into race relations and the absurd prejudices harboured among every community. The tension culminates in a street riot and the destruction of the pizzeria, leading to the death of a black man in police custody and a neighbourhood re-evaluating their relationships with one another.

In the blazing heat of an Italian summer, there’s not much 17-year old Elio Pearlman can do to wile away the hours by himself. Between reading, playing piano and the occasional dip, it seems just another sleepy summer holiday in the leafy shade of their palatial 17th century Lombardy villa. That is, until Oliver shows up. The chiselled doctoral student awakens a desire within Elio that he initially finds difficult to confront, and over the course of a turbulent summer, he and Oliver are virtually inseparable. It’s more than just a summer romance though and the film’s ending will have you tearing up like the onset of September rain.

Mad Max Fury Road, is the fourth instalment and reboot of the popular post-apocalyptic Mad Max Franchise – coming thirty years after the last film in the series.

Set in a future desert wasteland where gasoline and water are scarce following a nuclear holocaust, the hell-for-leather plot follows a gang of rebels escaping a crazed cult leader. While the film can be described as one long chase scene, it has received huge praise for its creative chaos, dramatic soundscape, those incredible desert locations and a certain jumpsuit-wearing, flame-throwing guitarist.