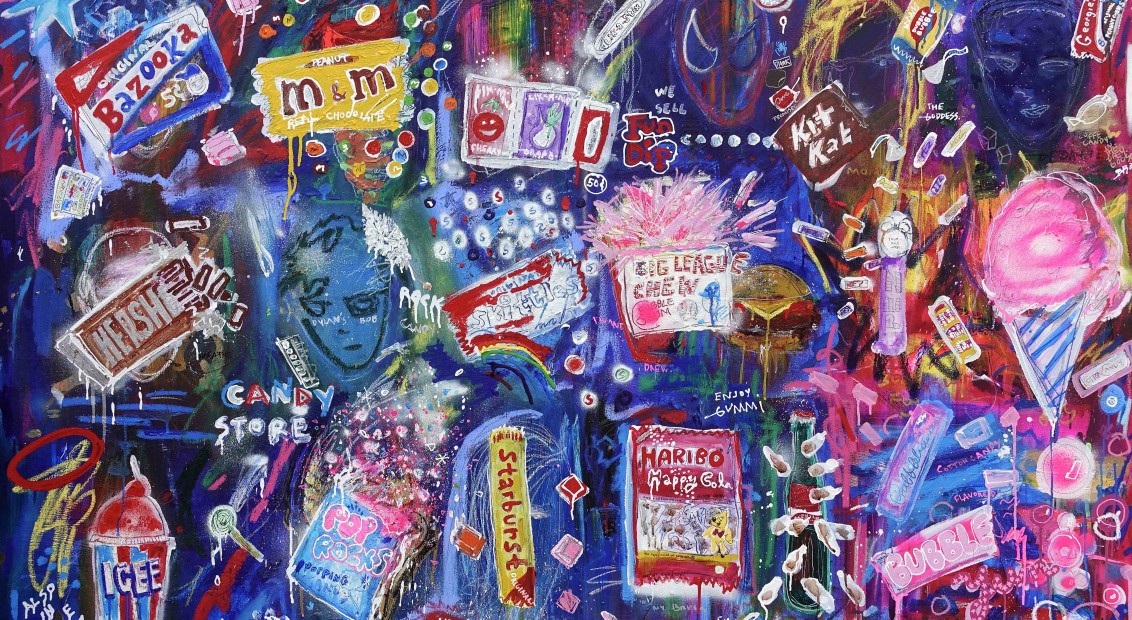 Over twenty years after leaving his family and childhood friends behind in New York City, LA based artist Gregory Siff faces a glorious and emotionally-charged homecoming as he prepares for his solo show at 4AM Gallery in the heart of West Chelsea’s Fine Art district.

It’s an hour drive from his family home in Rockaway Beach, where he’s speaking to us from his Mum’s basement, lovingly converted into Siff’s second studio after Hurricane Sandy devastated much of the Atlantic coast in 2012. In spite of the destruction, it’s now a place of creation, fuelled by the artist’s earliest recollections of birthday parties, hanging out with friends and shooting his own amateur footage. They are just one part of the powerful nostalgia that informs much of the exhibitions work. Aside from being his first major show in New York, WHEN YOU WERE LITTLE YOU USED TO COLOR is a means of reconnection, not only with the many High School friends Siff will reunite with at the show’s opening this week, but the memory of his parents, whose unrelenting interest, love and support feature prominently in our conversation.

Having already collaborated with the likes of Vans, Helmut Lang, Pyer Moss and most recently, Anthony Vaccarello for Saint Laurent‘s FW17 collection, Siff is fast developing a reputation as one of the industry’s self-taught gems. Following the death of his father in 2007, he cast his NYU degree in journalism to one side, instead choosing to focus on the creative vocation nurtured by his parents since childhood. Now, on the eve of one of his most evocative and eagerly anticipated shows, he’s coming to terms with the journey that has brought him here. 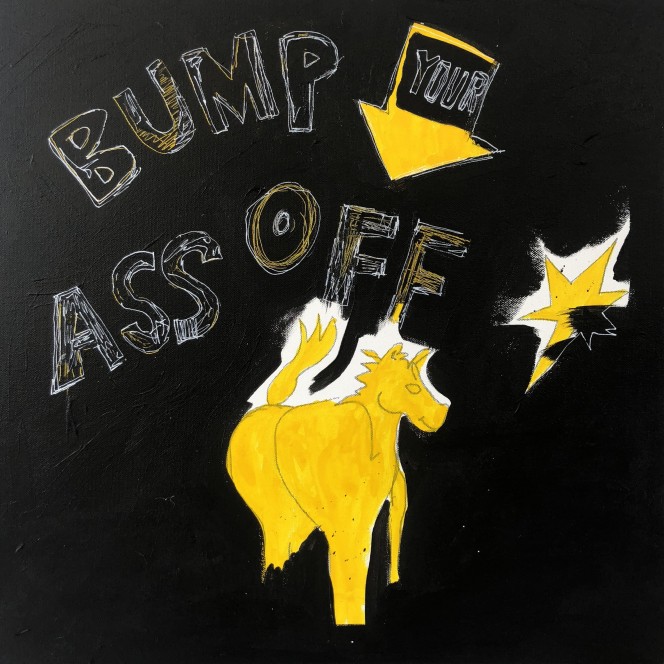 Finn Blythe: Whereabouts are you right now? Are you installing the show?
Gregory Siff: I’m actually reading your magazine, that piece you did on Rockaway Beach – I’m from Rockaway! Tomorrow I go to Manhattan for the install and all the pieces that were painted in LA are arriving on a truck. So I’m in Rockaway at my Mum’s, I got here a few days early so I could spend some time with her because this week’s gonna be crazy!

Finn: What are your earliest memories of living in New York?
Gregory: I grew up right here, down the block from the beach. My earliest memories are all growing up with the kids who were on my block, we loved comic books and action figures. If there was an action figure that didn’t exist I would paint it. My best memories are really just playing craps with my Dad, he grew up on the Lower East Side and we’d just sit on the porch and he’d teach me how to shoot sevens and elevens and I’d be running around with a phoney handycam making videos and filming.

Finn: It must be a special feeling, returning to the place of your childhood with a solo exhibition.
Gregory: While I was creating this show I was thinking, “What are my family and old school friends going to think about this?” A lot of them have never seen my artwork in person, so I named the pieces in a way that a lot of people in my family and in New York would understand. 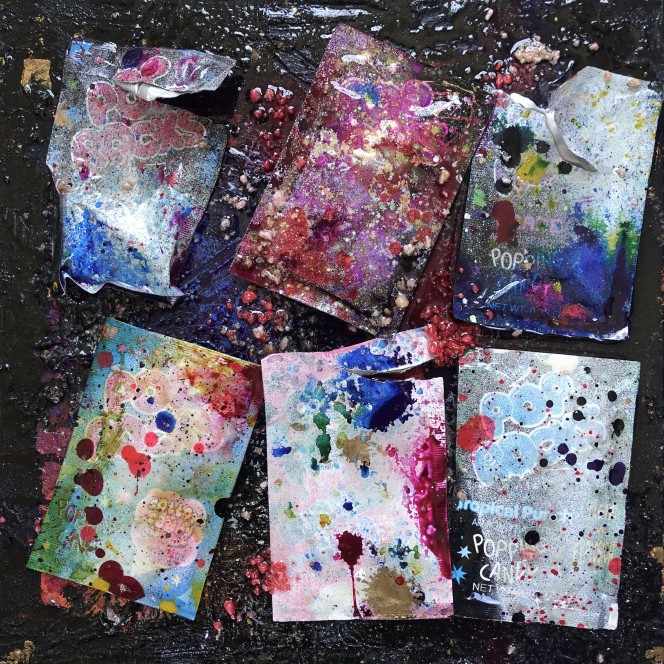 Finn: So why was it important to come back to NY, what was it about the city that felt right for this work?
Gregory: Well, I was really excited about sharing this stuff with the people that know me and have done my whole life. If I can make everyone feel like we’re in eighth grade again and evoke the whole magic of growing up here… I also really wanted to do the show for my Mum, she gets all excited when I’m in New York for projects, she wants to be involved, like if I’m painting something, she’s there. The title comes from me asking her, “Mum I don’t know what to call my next show, how did this all happen? Did you buy me easels? I know we went to museums…” And she said, “Well when you were little, we used to colour.” I didn’t think much about it but I wrote it down and then while at dinner with my friends we were discussing the title and one of them asked what I’d written and I said “Oh that’s something my Mum said, when you were little we used to colour,” and he looked at me and I was like, “Yeah, that’s it”.

Finn: What a great story.
Gregory: It’s really cool because I’ve been getting a lot of emails from friends that are like “Yo! We’re coming,” friends from high-school, guys that I haven’t seen in like twenty years.

Finn: It sounds as though you’re looking forward to reconnecting with the part of your life that you left when you moved to LA.
Gregory: You’re dead on point. I’m forty now, but I’m a perpetual happy child. I had a great father who I shared a really deep connection with, he lived until he was 85 and if I said, “I want to be an astronaut” or “I want to be an actor” or “I want to be a baseball player,” my parents were like, “Yeah! That’s great – go for it!” even when it was time to grow up and go to college they never discouraged one thing. When my Dad passed away in 2007 it was a really big moment and I wanted to find something more. I felt like there was a new person but I wasn’t angry about it I was almost like, “Now what’s this next life?” All of these paintings are an antennae to put love out, and if you get on that frequency then you’re like “Yes, I see what that is.”

The whole thing about time and nostalgia, we have these little fires inside of us and when it’s time to paint I know how to ignite them. I think about the memories I have of my Dad and then I think about what it feels like to be in love and they start burning something up and then you have a painting. You go from there, you go on the ride and you see where you’re going to land.

“…we have these little fires inside of us and when it’s time to paint I know how to ignite them.”

Finn: Those fires you ignite, do they tend to be positive or do you ever run off negative?
Gregory: Well if they’re going to be negative they get wistful. You wonder as you’re getting older, “How many more times can I think of that most amazing man? What did this stuff for me and let me be where I’m at right now, how many times is it going to work?” An acting coach told me, “If you know what breaks your heart, it could be a good or a bad thing, then that’s going to carry you through. It’s going to be a different character with the same kind of thing inside of him”

Finn: You’re utilising a range of different new mediums in this show, what are you feeling most excited about?
Gregory: There’s a piece called I remember everything in that room which is a canvas that I staple gunned to my studio floor for a year. I lifted it off, stretched it, and it’s one of the coolest pieces in the show because I’m basically saying, “This piece is where all these paintings came from, this is the exhaust of an artist,” and I’m really excited about installing it because you can match up all the other pieces to that one, it’s kind of a key.

Finn: What do you want people who come and see your show to leave feeling?
Gregory: It’s a great question. What I always want when people see my work is for them to think, “Well I could do this, I’m an artist, I have stories, my grandmother is important.” I want people to remember the value of their own individual arc, their journey. I hope it brings out a piece of humanity and reminds people that everybody had a grandfather who had a pipe and everybody had someone that was thinking about them and that loved them and that that’s something we can all remember and share.

WHEN YOU WERE LITTLE YOU USED TO COLOR is on at 4AM Gallery, New York, from 7th – 14th June.
Find more information on Gregory here.