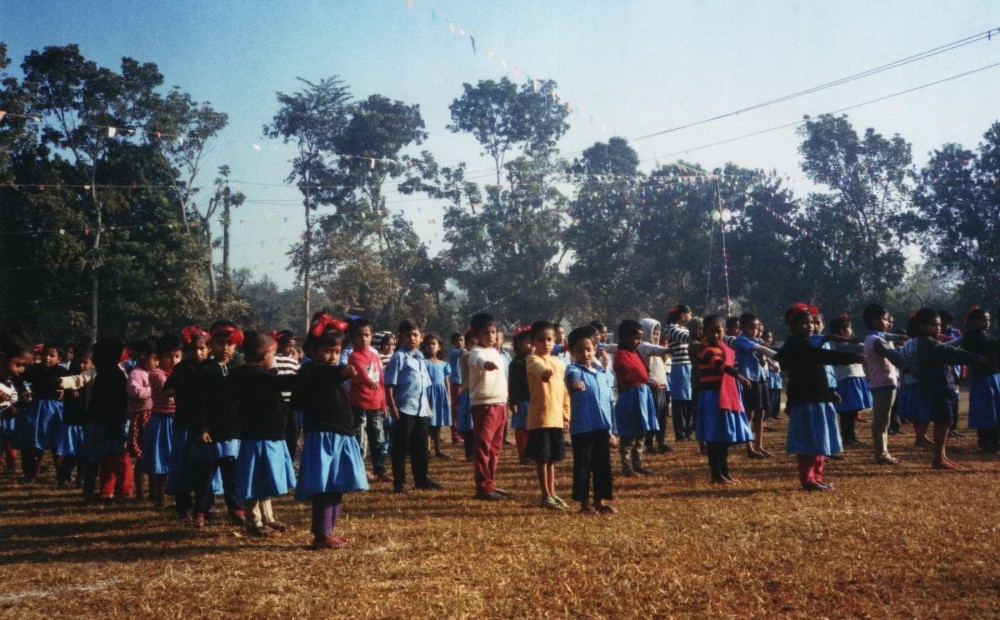 “The ultimate aim is to share the nostalgia and beauty for a place and enable viewers to empathise deeper with what they are seeing and a sense of what it’s actually like to be there,” says photographer and filmmaker Conor Rollins of his recent project, a film he made while travelling to Sreepur, a Bangladesh village project founded 27 years ago to help and support the country’s destitute woman and children. Providing food, accommodation, healthcare and the opportunity to learn new skills so they can be self-sufficient.

Where a more conventional documentary’s didactic tone might inform the viewer of what’s taking place in each shot, Conor’s approach is far more emotively driven. Using a Super 8 camera, he took photographs and footage that capture moments of joy that were unique and spontaneous. These flashes of colour, sunlight, and friendship were then complied into a five-minute short soundtracked by a specially composed soundtrack by Dirty Beaches and Trouble frontman Alex Zhang Hungtai. Adding to its empathetic and affecting movement, the viewer is taken through the streets and into the township, where people are working and children are playing, and the hardships they face are also apparent.

Rollins’ aim is to reflect his personal experience and that of an ‘outsider’ – the unfamiliarity and disorientation, alongside the warmth and care he immediately felt during his time in Sreepur. To convey the subtle beauty and mystery of a place often overlooked by the rest of the world.

CZ: Did you go to Bangladesh with the idea of making a film or was it more in the moment?
CR: I’ve known the charity, The Sreepur Village, for a long time now, and they’ve got a great card programme where they make Christmas cards, birthday cards… all sorts. Then they sell them overseas and 100 percent of the profit goes back to the village, so I kind of got involved through that project and went out to take some photos and make a few little videos, mainly for their online platforms, but during the process I knew I wanted to make something slightly more interesting and something beautiful in the sense it would show how I felt when I visited the place, so that’s why I used Super 8.

CZ: Tell me about the charity itself…
CR: Well it started about 27 years ago by a woman called Pat Kerr who was volunteering over there with another child charity that completely fell through but she decided to stay and set up this village, and since then they’ve been bringing in women from all over Bangladesh. It’s for destitute women that have no backing or company, they bring them into the village and give them training, nutrition, shelter, health care, but their main ethos is to give them confidence and new skills to go into society as self-sustained. They’ve helped thousands and thousands of women and children throughout Bangladesh, which is pretty incredible.

CZ: How long were you there for?
CR: Two weeks, so it was really brief, and that includes travelling through India to get there, because westerners weren’t allowed to go through Bangladesh a couple of months prior to my visit, as there was a lot of killings and tourists taken hostage in Dhaka, which is where we were flying into. So everyone was a little bit cautious, we weren’t allowed to go out and see Bangladesh as much as I’d have liked to. I spent the whole time in the village and in a way that made me feel like a part of the community.

“It’s for destitute women that have no backing or company, they bring them into the village and give them training, nutrition, shelter, health care, but their main ethos is to give them confidence and new skills to go into society as self-sustained.” 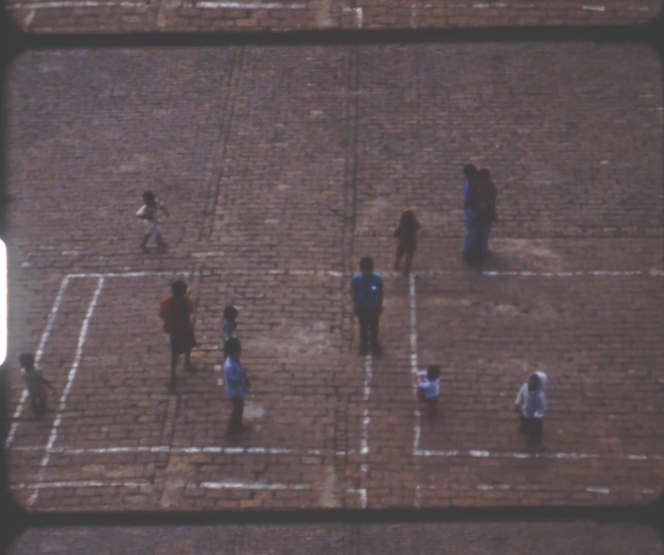 CZ: What journey does your Sreepur film take the viewer on?
CR: My journey began in Kolkata, India, where I spent a couple of days exploring and adjusting to the assault on the senses. I visited Kharagpur, a very rural location where my ‘outsiderness’ was made all the more apparent, the whole village came out to stare at the foreigner as I was given the tour of local gambling huts and homes. The security as I entered Bangladesh was, as expected, and after many hours of waiting and debate over whether we’d even be allowed in, we were finally accepted. Eventually, after escaping the chaos of the city we started driving to the village. This was then my home for the remainder of the time. I explored every inch of the village, which was surrounded by fences. After a couple of days I became more accustomed to the daily schedule of the community; school lessons, the lunchtime rush and afternoon lull, to the incredibly competitive evening badminton games. Snatching opportunities wherever I could to hear people’s stories and the circumstances which led them to the village.

CZ: I imagine those initial moments offered perspective quite quickly…
CR: Exactly. It was actually my first time in Asia, so that kind of environment… I think for anyone who gets to see it, that first visit is kind of a shell shock moment. To speak to the people and hear what they’ve been through and see them excited to learn and feel like they’ve been given a second chance to make a go of it. I was lucky to be there on their school sports day, and some of the races were… like in one of them they had to run in a giant pile of flour, there was like an egg shaped thing and they weren’t allowed to use their hands and just had to put their faces into this flour… it was just the most ridiculous scenes that made zero sense to me but made such a connection with all these people there. It was just about documenting that and getting a feel for the motion, the way of life, and the sound of it, so that’s where Alex [Zhang Hungtai] comes in.

CZ: How did Alex get involved?
CR: I’d always been a fan of his music, and then I managed to see him at Café Oto in London, and it was just this incredible performance. I went out on a whim when I was editing the video and got in touch with him. He’s incredibly busy doing so many interesting projects, and we just spoke for a while – I think he was in Taipei at the time – so we’d have these strange long phone conversations. I think he was just really intrigued by the project and liked the visual aesthetic of it and ultimately what they were doing for these women over there. We spoke back and forth for a while, he didn’t have all his equipment with him, but we thought it’d be best for him to use the limited equipment he had with him because it’d connect better – just to watch it on repeat and create something instinctively. I think it adds another element to the piece and I’m really thankful to him for doing it.

Gallery: Photographs taken by Rollins during his time in India 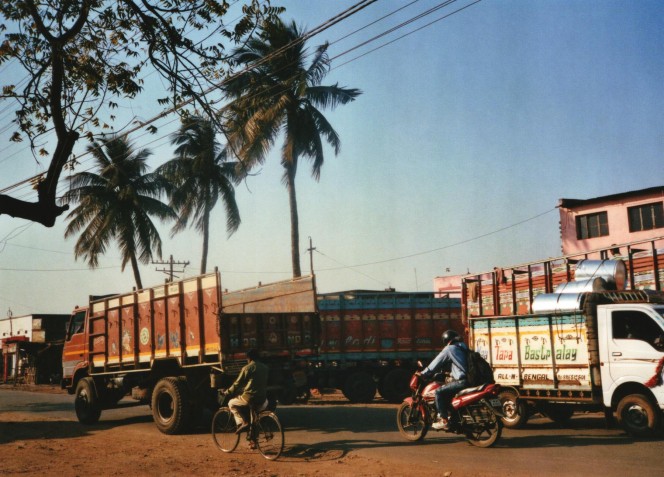 CZ: Did any moment in particular stick with you?
CR: Watching them make the paper from the Jute was really interesting, and then creating the various designs of cards was incredible to see as there’s such intricate detail on each design. I think you can really see the benefits of teaching the woman how the whole process works and the fulfilment of making them themselves and then receiving money back to go towards their life after Sreepur. Also, there was this group of about four or five young girls who just became obsessed with the camera, I think they were used to seeing a phone image or something, so they became obsessed with the idea I was taking an image but they couldn’t see it, especially with the Super 8 there was this other idea of what I was actually documenting, and you can hear them in the clip where she’s introducing her name and what she thinks of the project – it’s a really beautiful moment for me.

CZ: Was it an experience that’s shaped the way you make films or what you want to focus on?
CR: Definitely! It gives a new meaning to the worth of a project and what you want it to stand for. I know this isn’t necessarily a documentary that’s helping them in a conventional way, but it feels like I’m giving back.