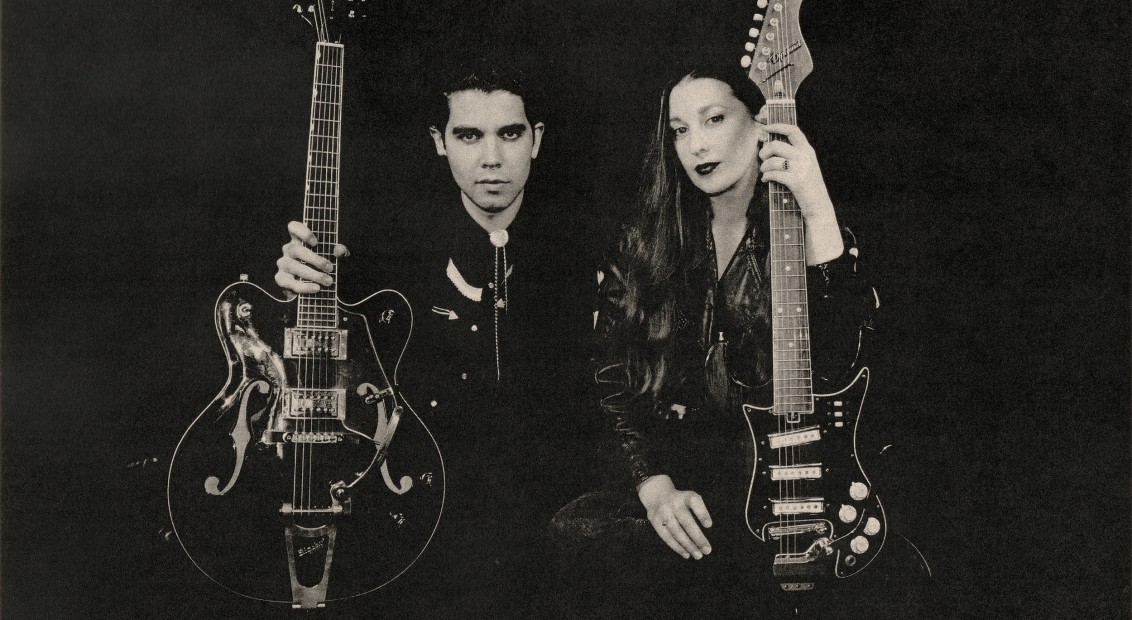 A year later the trio released their debut two-track cassette, London Falling / Morticia. Recorded and engineered between an empty bar and their bedrooms, the release showcased a raw energy the band had been honing, while London Falling tells the experience of being drugged and waking up in hospital after being hit by a car (a real story, no less) and Morticia pays homage to Anjelica Huston’s role as goth queen Morticia Adams.

Since then, the band have split their time between opening for the likes of The Gories, Yak, LA Witch, Skinny Girl Diet and Dan Sartain, and writing and recording their new EP, Evil Dreams. Now wrapped, spun into cassette form and premiering here, the EP is a full-blooded garage-surf romp that is ready to be let off its cassette tape leash at a special Halloween release show at Dalston’s Shacklewell Arms on 27th October.

To celebrate the release, the trio have put together an ultimate sound trip of influences and idols. Featuring the likes of Roland S. Howard, The Gun Club and Thee Oh Sees, its the perfect pre-Halloween sonic diet: eat it up and spit it out.

’76 Comeback Special by King Loser
Clare: “I chose this song, not only for the track, but for the music video, where a lone female assassin, played by the late, great Celia Mancini, carries out a hit on every other member of the band.”

Maldito by Jessy Bulbo
Shaun: “I think I came across this song from a random article online a few years ago, but god I’m glad I clicked cause this is the best damn modern rock & roll I’ve heard.”

The Dream by Thee Oh Sees
Niall: “A pure symbol of relentless energy, yet focused, sturdy and interesting throughout.”

God Take Me by The Coolies
Clare: “The Coolies are a band from Auckland, New Zealand who have been making the best punk songs for thousands of years. This one is off their 2015 album, Kaka.”

Jesus I Was Evil by Darcy Clay
Shaun: “Darcy Clay is a total NZ icon who didn’t give a fuck and recorded all his stuff on a 4- track tape machine in his bedroom. March 2018 will mark 20 years since his death.”

Mother of Earth by The Gun Club
Niall: “This is an unbelievably sad song, but has such a strong sense of beauty and foreverness.”

Kaikoura U.F.O by The Mysterious Tape Man
Clare: “Back in 1978 some guys in NZ reckon they saw a U.F.O in the skies above the Kaikoura in Te Waipounamu and I believe them. This song is a lucid dream.”

Bourgeois Blues by Tav Falco
Shaun: “Best discovery of 2016 for me. Apparently, at his very first gig, Tav came on between two bands and tore the venue to shreds with his relentlessly trashy version of this Lead Belly tune and the crowd was just in shock.”

Silver Chain by Roland S. Howard
Niall: “The orchestration and dynamics in this song are unreal and somehow feels intimate to the point where you completely understand the writer.”

Black Eyes by The Tielman Brothers
Shaun: “One of the greatest and most beautiful instrumentals ever played which morphs into a frantic 1960’s masterpiece. I love the dynamics in the lead guitarist’s playing; so gentle and so well-controlled.’

Night Shades play at The Shacklewell Arms on 27th October. Entry is free.
Follow the band on Facebook.