The man who changed jazz, documenting the life of John Coltrane

Analysing and placing the gargantuan legacy of a revered artist into a coherent narrative is a daunting task. Though having already created in-depth documentaries on icons such as John Lennon, Harry Nilsson, and Bette Midler, writer-director John Scheinfeld is something of an expert in the field.

Rooting his story in conflicting themes of addiction, spirituality, and an eternal fidelity to the music, Scheinfeld paints a nuanced picture of the man behind the seminal sounds. Comprising interviews with musicians, family members, and even ex-President Bill Clinton, as well as rare home footage and recorded performances, all narrated by Denzel Washington, Chasing Trane is a perfect primer to Coltrane’s life, career and legacy.

We spoke to John ahead of a London screening to talk about the challenges of interpreting a mythologized life, the narrative of Coltrane’s music, and the artists carrying on his legacy today.

Ammar Kalia: Did you feel pressure to do John Coltrane’s iconic status justice?
John Scheinfeld: My goal with Chasing Trane was to tell a strong, compelling and honest story that doesn’t rewrite history to satisfy Coltrane’s biggest fans. He absolutely had his demons and they are addressed in a truthful manner. To fully appreciate Coltrane’s redemption and the musical excellence that followed, it was critical the audience feel the darkness that encircled him and that, through sheer force of will, he successfully overcame.

“Everyone I spoke with who knew Coltrane described him as a humble man dedicated to his craft, a man of few words.” 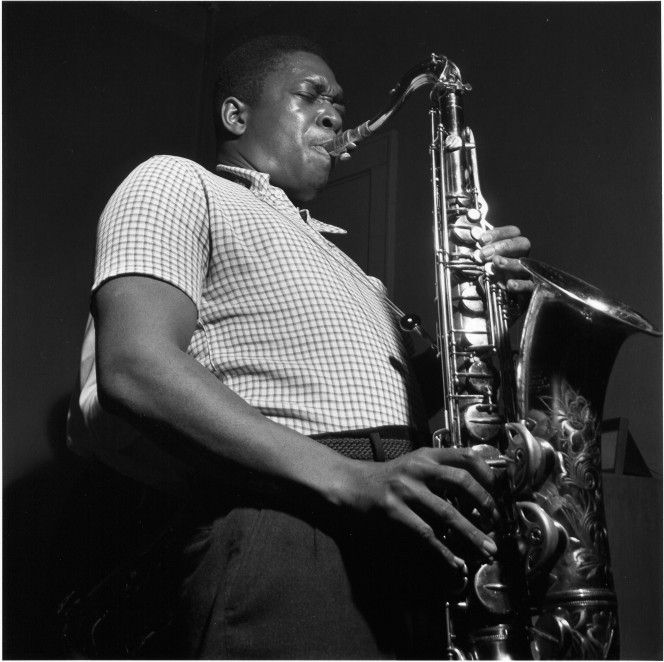 Ammar: How reliable is any artist’s utterance regarding their work? And how reliable do you feel Coltrane’s is?
John: Some artists are truthful, some carefully craft an image, others are strangely inarticulate, and others, like John Lennon, are truthful in the moment but that truth evolves and tranforms over time. Although Coltrane never did any television interviews, and only a handful for radio, I wanted him to have an active and vibrant presence in the film beyond performance. Fortunately, he did a number of newspaper and magazine interviews at the height of his career and I believe he chose his words carefully so as to be truthful while opening a small window into his thought-processes.

Ammar: What are your favourite Coltrane records?
John: Like many people, I was introduced to Coltrane through My Favorite Things, so that will always be one of my favourites in his extraordinary body of work. I love Blue Train, Giant Steps and, of course, A Love Supreme. Between those are wonderful compositions and interpretations that I go back to time and again when I need inspiration.

Ammar: Why do you think his music and persona still have such resonance today?
John: The key to understanding John Coltrane is that he is timeless. Not only timeless, but his work defies categorisation, he was constantly pushing the envelope and exploring the limits of his art. And he did so without concern for the effect it might have on his record sales and overall career. This resulted in an amazing catalogue that remains as fresh, unique and inspirational today as it was when he recorded it.

Ammar: How influential was Alice Coltrane to John’s musical development?
John: Alice was clearly the love of John’s life and she motivated, inspired and supported him in many different ways. ‘Muse’ can be an over-used word, but in the case of the Coltranes it seems apt. As a fine musician in her own right, Alice was able to contribute to his musical and spiritual journeys.

Ammar: Which artists do you feel are continuing Coltrane’s legacy today?
John: I’m not an expert in jazz but one of my favourite artists following in Coltrane’s giant steps is Kamasi Washington. His mastery of the instrument, his intense desire to expand his horizons, and his spiritual nature display the same soul of a musician as did Coltrane.

Chasing Trane is is being screened by Commune at Dalston Rio cinema on 16th September, including a performance by The Binker Golding Trio. Tickets are available here.