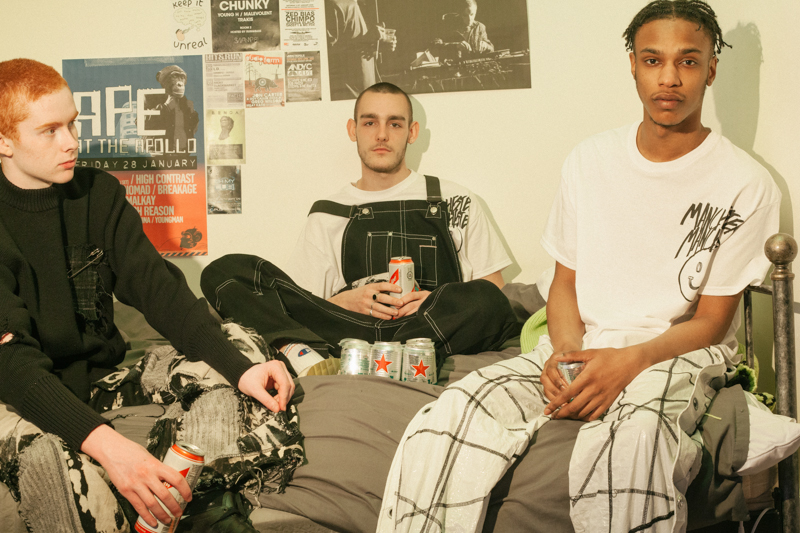 “I wanted to depict friends borrowing each other’s clothes and the process clothing goes through during clubbing, house parties and staying at friends’ places,” says Royal College of Art (RCA) graduate menswear designer Ellie Rousseau about her MA collection, STATE ’08.

A celebration of escapism and expression filtered through the young designer’s own experiences of Northern youth culture, the collection fused Madchester style tropes – think baggy clothes, loose tees and plenty of acid wash – with timely political slogans such as “Corbyn In, Tories Out,” “Save Our Future,” and “Peace for MCR”. 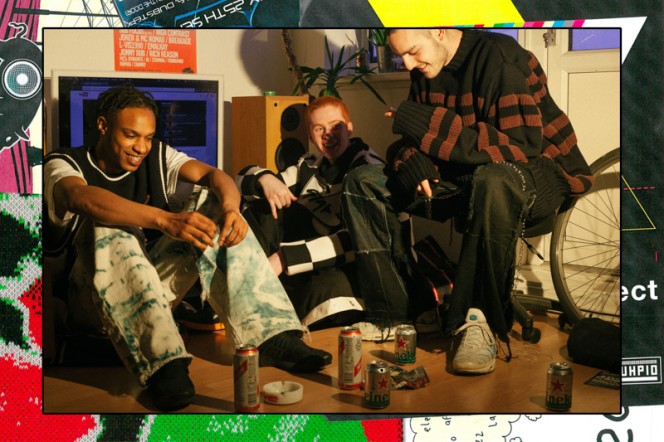 “[It] was a tribute to my college mates – the essence of kids essentially going out and getting naively wrecked,” Rousseau explains. Therefore it felt only right that the collection should be accompanied by a special film showing Rousseau’s friends wearing the garments on a night out in Manchester, further grounding its concept to the streets that inspired it. Loud and contemporary, yet perfectly attuned to the Madchester era: Factory Records, Tony Wilson Joy Division, acid house and Bez .

Having cut her teeth interning at Devon Halfnight Leflufy, J.W. Anderson, and working on Liam Hodges’ past three collections, Rousseau is beginning to carve a name for herself. Here we talk to the rising menswear designer about her fascination with subcultures, Manchester’s style codes and Northern identity.

Clementine Zawadzki: Have you always been interested in fashion?
Ellie Rousseau: I didn’t really care until I got to college. I left a strict all-girls high school and it wasn’t until then that I started to discover style coding and develop an interest in visual identities and subcultural groups. I think it also stemmed from fashion campaigns in magazines – mainly womenswear as back then menswear wasn’t a regular – I’d tear pages and cover my bedroom wall when I was about sixteen. I liked the idea of inflicting a persona into a look. Westwood was a big love of mine early on; I liked the anarchism and the non-conform.

Clementine: So how have those influences and designs changed?
Ellie: My influences have always revolved around youth culture… a sense of bonded attitude and belonging within a group. It wasn’t until working on my MA collection that I honed in on channelling personal experiences into my work rather than referencing other artists or eras. I wanted to depict a chapter of my life, yet knowledge of subcultures and British style coding definitely plays an underlying factor through everything I do. Ted Polhemus’ writings have been a backbone of references.

“I wanted to depict a chapter of my life, yet knowledge of subcultures and British style coding definitely plays an underlying factor through everything I do. “ 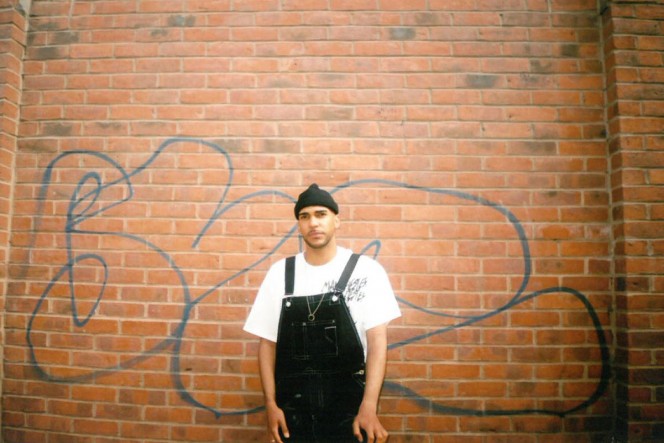 Clementine: You’ve also interned at Devon Halfnight Leflufy, J.W. Anderson, and worked on Liam Hodges SS18/FW17 – how have these experiences shaped your approach?
Ellie: Working at J.W. Anderson was my first real taste of what it’s like working for a fashion house. Gaining first hand experience in Jonathan’s fittings, sampling in the atelier, visiting factories, archiving the collections – the best way to learn the industry is by working in it. Working at Devon Halfnight Leflufy meant I moved to Antwerp. Living in another country made me see England and the UK in a new light and it encouraged my interests in British identity and culture. I’ve worked with Liam for the past three seasons (FW17-FW18) on the Knitwear for his collections. We have similar points of inspiration and his brand identity is something I’m naturally very drawn to. It’s nice to be able to design for two different areas yet still notice a common thread.

Clementine: What was your experience of growing up in Manchester? Ellie: For me, growing up in Manchester translates to social circles: intermixing and expanding. Northern attitude and a sense of recklessness alongside a huge pride for the city. STATE ’08 was a tribute to my college mates – the essence of kids essentially going out and getting naively wrecked. I also channelled some tough times in my research, the stages of “when has it gone too far?” blurring into escapism rather than recreation. I wanted to reflect the stages in-between naive and ‘adult’. 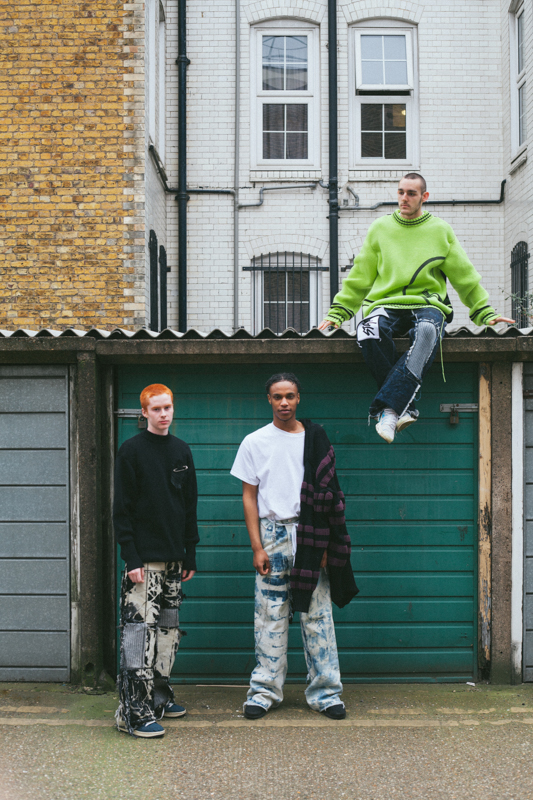 Clementine: Do you think fashion concepts should always derive from something personal?
Ellie: I think when taking influence from something personal it’s harder to express and ensure others see what’s in your head. There’s so much information readily available online that I wanted to pull away from that resource and portray something ‘original’. Yet I feel originality isn’t a thing anymore – just original combinations. The same with identity, I feel visual identities are a thing of the past and you can no longer really tell what music someone listens to from what they’re wearing. Style tribes are more fluid thanks to the accessibility of information on the Internet. We seem to be controlled by branding more than reflecting personal interests nowadays. Or maybe it’s that certain brands reflect the personal interests now… 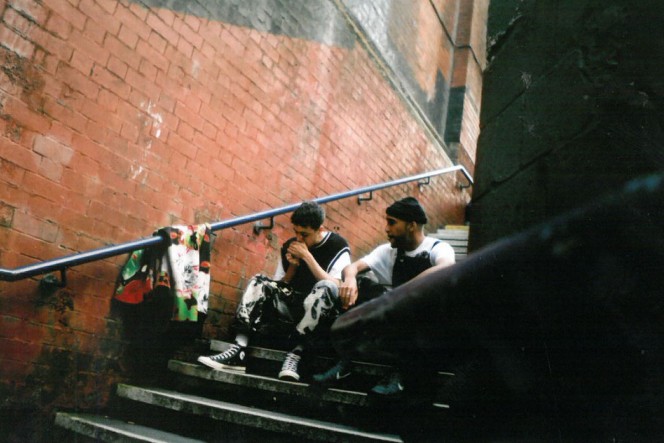 Clementine: Why do you think northern culture is so appealing?
Ellie: The North does subcultures and music very well. From casuals to Haçienda and Madchester… it’s the stories of working class lifestyles, revolutions in music and partying; things that people can relate to when walking not so dissimilar paths. Also the socio-political climate is quite heated at the moment with Trump, Brexit, fake news, and the Tories… The North has always had a sense of rebellion and cheekiness – it’s appealing.

Clementine: Manchester in particular has a real identity of its own; this was particularly evident after the attack earlier this year when the city united and elements of its pop culture became anthems of strength.
Ellie: The response from the attacks was overwhelmingly heart warming. I was in London, but it was amazing to see the response from the people of Manchester. This inspired the Manchester Bee tattoos on my model’s palms for the RCA show on election night. For my research, I mainly referred to a selection of photographs I had taken between 2008 and 2011 that narrated the social circles and clothing worn between us all. I made a floor to ceiling collage of memories, snapshots of our clothing and styles, the journey of my own visual identity through those years, where we lived, where we went, all the different people. It was a time period that still stands out for a lot of us. What I love about the city is the amount of memories it holds for me. And that it’s so far from being anonymous.

Clementine: Did you always see the collection making a political statement?
Ellie: I wanted to display an air of anarchy and the refraining of obeying to the system, as this has been a constant throughout my research. It wasn’t until we found out that our show date was Election Day that it clicked and I realised I had a platform to express how myself, and an increasing sector of young people, feel politically.