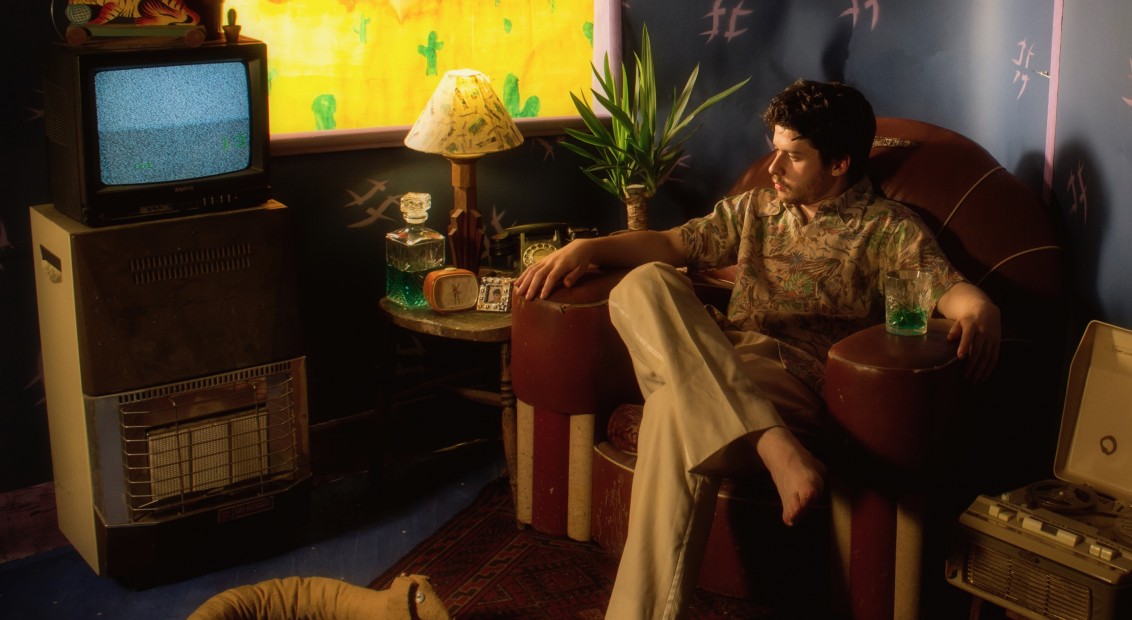 After recently revealing his hazy new single Voodoo Saloon, multi-talented musician, illustrator and HEROINE 5 star Jerkcurb – aka Jacob read – is proving himself to be man of the moment. Last year his debut single Night On Earth not only sold out of its limited vinyl run, but so did his celebratory show at London’s Electrowerkz venue.

To mark the release of his new 7″, Little Boring Thing, we recruited Jerkcurb to curate a perfect Autumn playlist for us. From the elusive Paddy McAloon and his looping autobiographical narrative to The Gun Club’s crushing, textured guitars all the way through to a jazzy score from 90s cartoon series Hey Arnold!, you are sure to discover some new gems. Prepare to immerse yourself the weird and wonderful world of Jerkcurb.

I Trawl The Megahertz by Paddy McAloon

“A 21-minute masterpiece. It’s like Laurie Anderson narrating an episode of Sex & the City, but more pretentious. Paddy McAloon, from 80s British pop band Prefab Sprout, was going blind when he recorded this. The narration was recorded in an hour in a hotel foyer. Is it midi orchestration or a real orchestra? I don’t know. My favourite line is “I am tying a shoelace & finding the pavement fascinating, when the comet hits the sky.” I have no idea what it means.”

A Summer Long Since Passed by Virginia Astley

“This encapsulates the sounds and sensations of the British countryside. A rare, subtle and beautiful album from 1982. Playground melodies and field recordings, peaceful music of a light breeze.”

The Sexual Loneliness of Jesus Christ by Jackie Levan

“Powerful, guttural, song by the late Scottish songwriter Jackie Levan. I don’t know much about him, but the powerful lyricism and vocal performance makes this sacred art.”

The Breaking Hands by The Gun Club

“An LA cult punk band records an accidental dream pop masterpiece. Most Gun Club fans hate this album, but I love it. I love the production by Robin Guthrie, from Cocteau Twins. Guitar cracks like thunder. I used this as referencing when I was mixing my first single Night On Earth.”

Designed To Kill by James Chance

“Here’s some contrast. I think discovering James Chance was a big thing for me. I was 16 and used him as a kind of role model for how to sing and perform in my old band. Raw, visceral energy. Very primal. Punk is basically sped up rockabilly, which in reality can be quite boring. But the New York No Wave stuff from the late 70s was a lot more spontaneous, creative and dangerous.”

On The Banks of the Owchita by John Fahey

“Guitar like wind chimes. The great teacher, prophet & spiritual leader, John Fahey. I learnt to play guitar through this studying this man. I have all of his guitar lessons on DVD, they weren’t easy to find, which is a sad thing.”

“For 30 years, three Arizonian men recorded their every attempt at playing music. Countless albums captured hours of discordant melodies and perverse lyrics. Their whole existence is a shambolic mess. An anti band, that defied to be labelled or even heard. But I’m a nerd so I spend my pastime fishing for great SCG songs. They do exist, and they do not want to be discovered. Alan Bishop is the greatest lyricist to ever live.”

“I see Slim as Roy Orbison’s creepy uncle who lives out in the desert. He’s intimate, yet distant. He’ll love you intensely but briefly, seducing you in the night with the scent of hot musk and sandalwood, before disappearing from your life forever, come morning.”

“Last year I rewatched the entirety of Hey Arnold!, the cartoon, and it was surprisingly even better than I remembered. Jim Lang’s midi jazz noir score is existential beauty.”

This song is like Red Bull for the soul. I didn’t think much when I first heard it, but it kept creeping back to me. “Here comes the midnight, with the dead moon in its jaws” is such an incredible line. Steve Albini production, 7 musicians and 1 take. No rehearsals. Jason Molina was a true genius.

Night Of The Hunter OST by Walter Schulman

“I love this film. A classic tale of love & hate. The boat sequence when the children seek refuge from the evil preacher trying to kill them is impeccably crafted. It’s both extremely ominous and beautiful. It inspired my last single, Voodoo Saloon, in terms of drifting between different sections, not repeating, and evoking that feeling of fear and wonderment.”

“Sweet and dear Abner Jay. A cult bluesman, one-man travelling band, who performed and sold his records out of his trailer. He gets to the heart of the human condition. He lays his emotions bare. He’s funny when he wants to be. And I believe every word he says. This recording is from the mid 60s I believe, but its always hard to tell with Abner Jay, as he transcends time and space.”

Incest at Best by Daddys Hands

“Daddys Hands are a kind of a mystery band that I became a bit too affiliated with. They were around in the 90s and early 00s, and both singers (Emily and Dave) tragically died in different circumstances. I discovered their music by accident, via a crate of recordings and created a Facebook page for them in 2010. I got friends of the band emailing me, ex lovers and fans, asking for re-releases, sending photos, asking me questions etc. I was a bit out of my depth, but all I wanted to to do was spread the seeds of their existence, which was a beautiful thing. Dangerous and dark music, too chaotic to garner any true consistency. A band that apparently lived very close to the edge, and the music reflects this.”

In Spite Of Me by Morphine

“Quiet and understated, this song is a glass of champagne in the night breeze. I advise watching the documentary about the singer Mark Sandman, because its very tragic and fascinating (to me). Morphine were a band that had an instinctively recognisable sound. Very poetic and dark, with just enough light in there to not be depressing.”