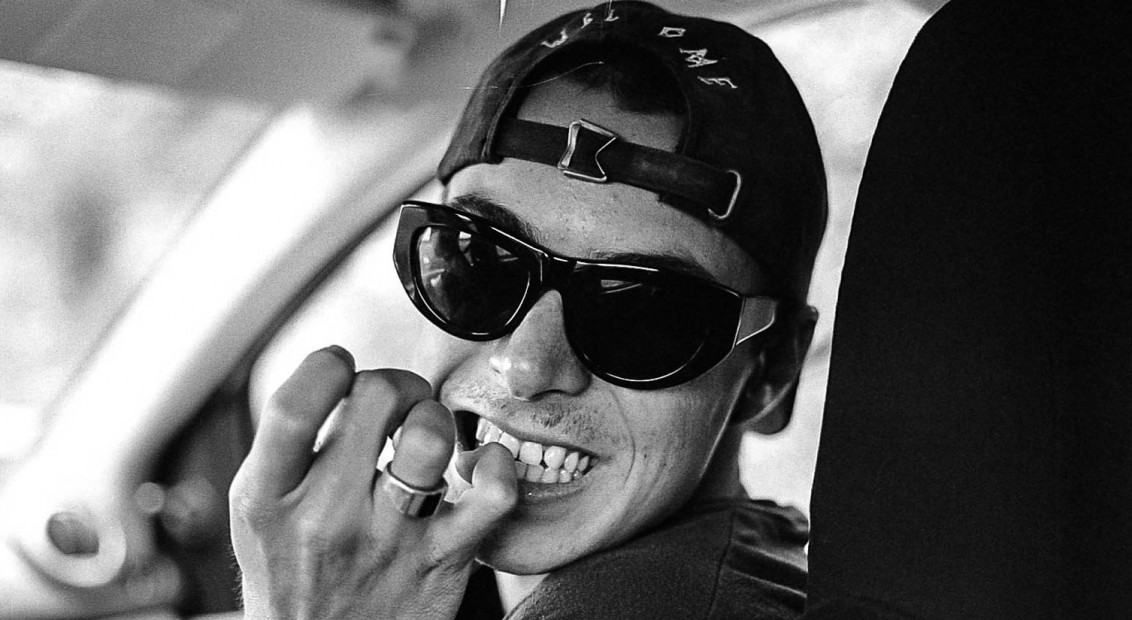 Skater-slash-photographer Josh Nice first met the Perdu skate crew in 2015 when they were in London checking out the Southbank skate scene. Josh and the crew’s mutual love of skateboarding ironed out any creases in the language barrier and an instant friendship formed.

Since that initial meeting, Josh has been hanging out with the Perdu guys and documenting them for a series of zines and photobooks. His latest trek with the crew took him to Bordeaux and Hossegor for two weeks, resulting in this latest zine, titled June.

Now back in London having finished production and design of June in just a month, Josh sat down with us to share his latest journey. 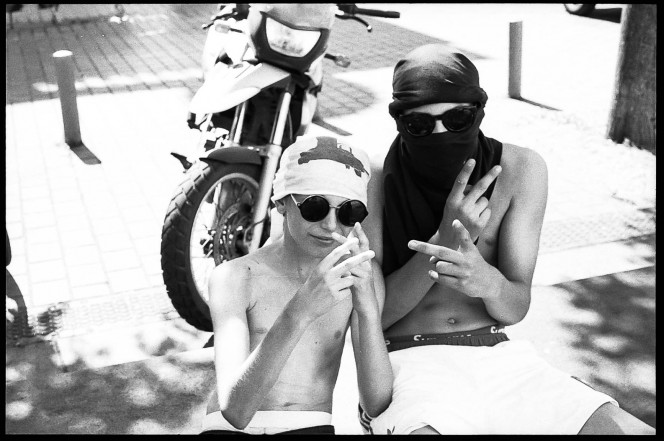 Aaron West: Your latest zine, June, is titled as such because it was shot over a two week long skating adventure, travelling between Bordeaux and Hossegor during the month of June. What was your take-away feeling from that time?
Josh Nice:  I was just stoked to be back in France and even more stoked to be back in Bordeaux. I’d previously been to Paris this year in March but I hadn’t been to Bordeaux since December last year so I was hyped to be back during the summer to enjoy the weather and catch up with people. I guess my take-away feeling from this trip would just be more crazy memories and how much fun it is to skate and do stupid shit with your friends and not have to think or worry about anything. I don’t know what it is about Bordeaux but I love spending time there and in the south west of France. I stayed in a place called Cap Ferret for a couple of days which is a little beach town not far from Bordeaux, I’d never been there before but it was nice to travel around and not just stay centred in Bordeaux.

Aaron: Do you have any favourite memories from your time out there?
Josh: Yeah I have some pretty mad and funny memories, for sure. The first one that I will never forget was when my friend Andrea fully got knocked out in the street by a complete stranger for no reason at all, it was fucked! It happened one night in Bordeuax, we were out drinking and celebrating this French holiday called Fête de la musique. It’s like one day a year where French people just play music and party all night. People in the city were blasting music from their front rooms, restaurants and shops with these massive rig speakers, it was fucking sick. It was basically like Carnival in Notting Hill but the French version. Anyway, me and my friend Arthur go to this guy’s apartment just to pick something up real quick. We leave the apartment and walk round the corner and our friend Andrea is walking towards us and then out of nowhere this dude just sucker-punches Andrea straight to the ground. He was KO’d for like ten seconds, it was mad scary. Luckily he was okay, with only a few tiny scratches to his face, but it could’ve been way worse.

Aaron: Sounds mad.
Josh: Yeah! My guy Yentl also organised a magazine launch for Wasted Talent Mag, him and his homies had been working on getting a physical mag together for ages and they hosted a launch party at a brewing bar on the beach in Hossegor. It was such a sick night; me, Arthur, and Gary drove down from Bordeaux to spend the weekend there to go skate and chill on the beach and to go celebrate the launch of the mag. Seeing Yentl’s hard work pay off was really sick, I was so stoked for him. I can’t really describe how much fun that weekend was; it was one of my favourite memories from the whole trip for sure. Hossegor is a truly beautiful place. 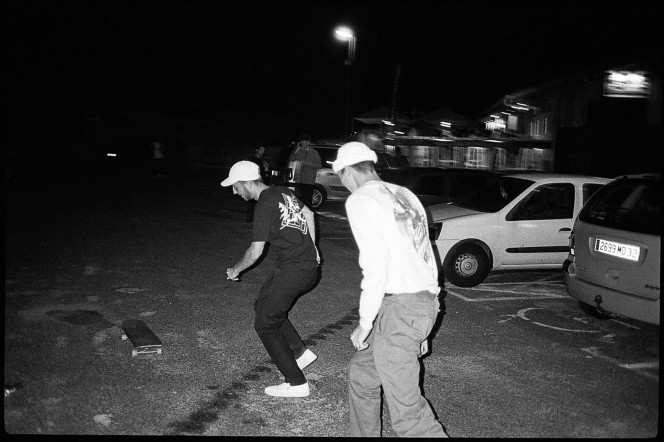 Aaron: You’ve done skate zines before, in Paris and Berlin, so what was
your motivation for this collection? What drew you and the Perdu crew to
Bordeaux and south-western France?
Josh: Most of the Perdu guys are from south-western France, A lot of them live in Bordeaux but some of our friends live down at the coast in Hossegor. It’s the best part in the whole of France for sure, everyone and everything is so chilled out, the weather is good and the skate scene is amazing. Paris is a great city don’t get me wrong, but there’s too much going on and its always really busy whereas Bordeaux is way smaller than Paris and it’s such a laid-back relaxing city – that’s why I love it so much.

Aaron: You’ve been traveling Europe with the Perdu crew for a few years now. How has this relationship changed over time? I imagine your French has become much better.
Josh: I first met Gary and Arthur two years ago in London and we’ve just been friends
ever since. They’ve come out to London a few more times since and I’ve been out to
Paris a lot with them, and then to Bordeaux where I was introduced to the rest of the
crew. I’ve known them for two years but it feels so much longer than that. I’m so excited when I go out to France or they come over here because we don’t get to see each other often due to living in different countries. We all try to see each other every few months or so. Arthur came and spent a few days in London to skate and I flew back with him to Bordeaux. I went to Copenhagen a week after I flew from Bordeaux back to London and I saw my friend Yentl and Andrea there too which was really nice. The relationship over time just keeps getting better and better, we are all super tight and everyone gets on with
each other. We speak English most of the time and the dudes have definitely got
better, they are pretty much all fluent. I speak French with them too but it’s a lot
harder, my French gets better when I’m drunk.

Aaron: Also, why the name Perdu crew? Perdu in French means ‘lost’.
Josh: Because we are lost.

“We leave the apartment and walk round the corner and our friend Andrea is walking towards us and then out of nowhere this dude just sucker-punches Andrea straight to the ground.” 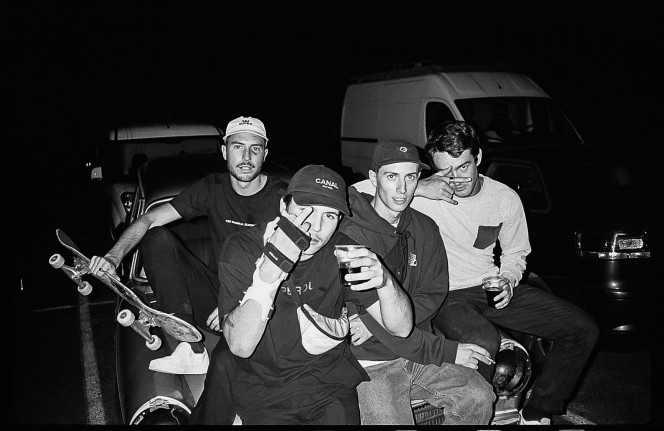 Aaron: Do you have any particular photographers/artists you draw inspiration from?
Josh: Ed Templeton will always be my number one inspiration, he’s the GOAT. Jason Lee is another legend who I draw inspiration from. Tino Razo is sick too, he made a
hardback book earlier this year about skating abandoned backyard pools in and
around California, that will always be one of my favourite books of all time. My
friend Yentl and what he does is inspiring; he works really hard and he deserves the
recognition. My friends from back home inspire me too. Harry Wyld, who has been my
friend for a long time now, is an amazing artist and he deserves way more
recognition and attention, he’s a really creative dude and a total sweetheart. All my
friends inspire me. 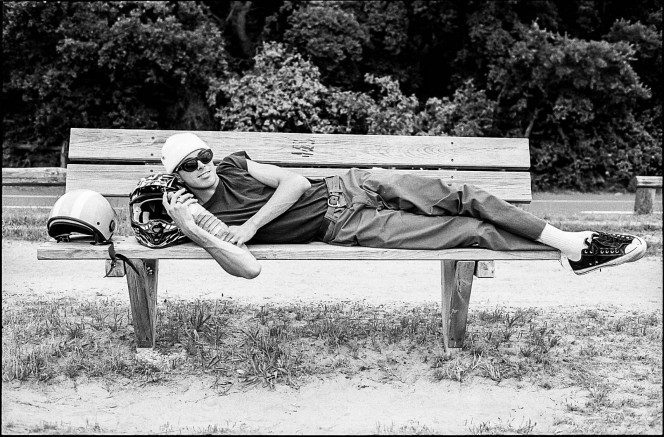 Aaron: You’ve mentioned that whenever you shoot a zine you always have an idea of the final layout in your head beforehand. What was that for June, and did your ideas change significantly over the course of shooting and production?
Josh: It was about halfway through the trip and I shot a photo of Gary in the car (it’s the
photo that appears on the front cover). I instantly knew it would be sick and I wanted it to be on the cover. I have a rough idea of how the photos will look when I shoot them, Obviously I shoot film so I don’t actually know what they look like until I develop them, but I think other film photographers can just kind of know how the photo will look after
you shoot it. So yeah, I had a rough idea of what every photo would look like so I was
just mentally planning in my head which photos would work well together and how
they would look in print. Strangely enough when I started to lay the zine out after I’d
developed all the photos, I came up with a layout fairly quickly and managed to get
the zine done in about a month. This is very unusual for me because I tend to spend
a very very long time planning and re-arranging zine layouts. I go through about four
test prints before I’m satisfied, but with this zine I was happy with it after the first
test print.

June by Josh Nice is available to buy here.